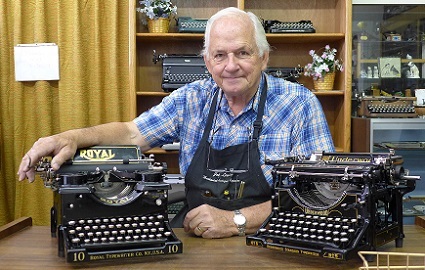 In the spring of 1966 I was hired as a typewriter repairman trainee. The company was Yukon Office Supply in Anchorage, Alaska. They were the largest office machine store in Alaska, and the authorized Royal typewriter dealer. On my first day on the job, my service manager, Wally Hartley, who had been the service manager at the Royal factory service center in Missouri, sat me down in front of a manual Royal typewriter, model HHE. It was the start of an interesting and rewarding career. I had not typed on a typewriter since 1958, in Belton, Missouri, where I took a typing class because it was either typing, or a semester of home economics. Typing seemed more manly to me, so typing it was. I did not fare well in that class for two reasons, the teacher was to stern for me, and she used a metronome for rhythm, which I absolutely could not keep up with. The other reason was about 5 foot tall, curly brown hair, blue eyes, and she sat next to me in class. Needless to say, at 13 years old, typing was the last thing on my mind. To this day I can still see her typing away on her Underwood. I never got past 26 words per minute, to this day, I still think those classes should be segragated by sex. Years later, when in boot camp at Parris Island, South Carolina, our drill instructor gathered us around him on the barracks floor, and began to ask questions. Can anyone play a musical instrument? Can anyone speak a foreign language? Can anyone type? I certainly did not raise my hand, for fear of embarrassing myself. So, here I am in Anchorage with a Royal typewriter in front of me, and a brand new tool kit on my workbench. I did very well while in Anchorage and by the fall of 1967 I was promoted to the service manager of the company's south west branch office in Juneau, Alaska. There I was trained on many machines, from dictating, calculator, micro film, copy machines, to mention a few. By 1970 I was the service manager at Commercial Office Supply in Astoria, Oregon, the place where I fell in love with old mechanical antiques. The original Owner of the business was retiring and needed to remove some personal items from the store's basement. His name was Jack Whitliff and he was 86 years old. He had started the company some 50 years earlier and was much in need of retirement. He asked me if I would help him remove some machines from the basement to a storage building, and he would compensate me for my time. I had grown fond of him and thought nothing would suit me better. I had not been in the basement in the six months that I had been there and had no idea what to expect. Just junk, I thought. Once in the basement I was shocked to see row after row of old machines setting on steel shelving. Jack had been saving, over the past 50 years, many of the old trade-in typewriters that he felt had either value, or historical significance. I had never seen, or knew there ever existed, an old vintage typewriter, most of which did not even look like what I thought a typewriter should look like. As I continued to help Jack clear out the basement, I had to ask, what are you going to do with all of these old machines? He replied, probably sell them in a garage sale. I had never heard the term Garage Sale, so I ask how much he would be able to sell them for. He replied, maybe a couple of dollars. That was it for me. I stood right up and asked if I could pick out three to keep if I worked all day just for them. He said yes, and I became the proud owner of a Blickensderfer #7, with wooden carry case, a Remington #2 understrike typewriter, with wooden base and tin lid, and an Oliver #5 with wooden base and tin cover. At that time, I thought that I was the only person in the world that had one of these machines. Years later the internet spoiled it alI for me. I still have the three of them. That was a good year for me, as the house we were renting was owned by the same company's book keeper, and in the basement was a hand crank 78 rpm record player. The crank would not build up any resistance so it would only play if you turned the platter with your fingers. I asked the owner what she wanted done with it and she ask me if I would dispose of it for her as she did not want it, and of course, I said yes. It was an upright oak cased Columbia phonograph which I still have today. Now I was a collector, and well on my way to collecting hundreds of old mechanical goodies. Over the years I started my own office machine shop and never shied away from the service end of it. During the past 53 tears I have had many chances to add to my collection and to my machine service skills. Currently I only sale and repair vintage machines. These past few years I have sold most of my more collectible machines, and kept the ones I felt I needed either for parts, or for resale to beginning collectors and typist. Recently, Darlene and I have cut our shop time down to three days a week. Although I am not in the shop as much any more, I still maintain a home shop where I can get out of Darlene's way in the house